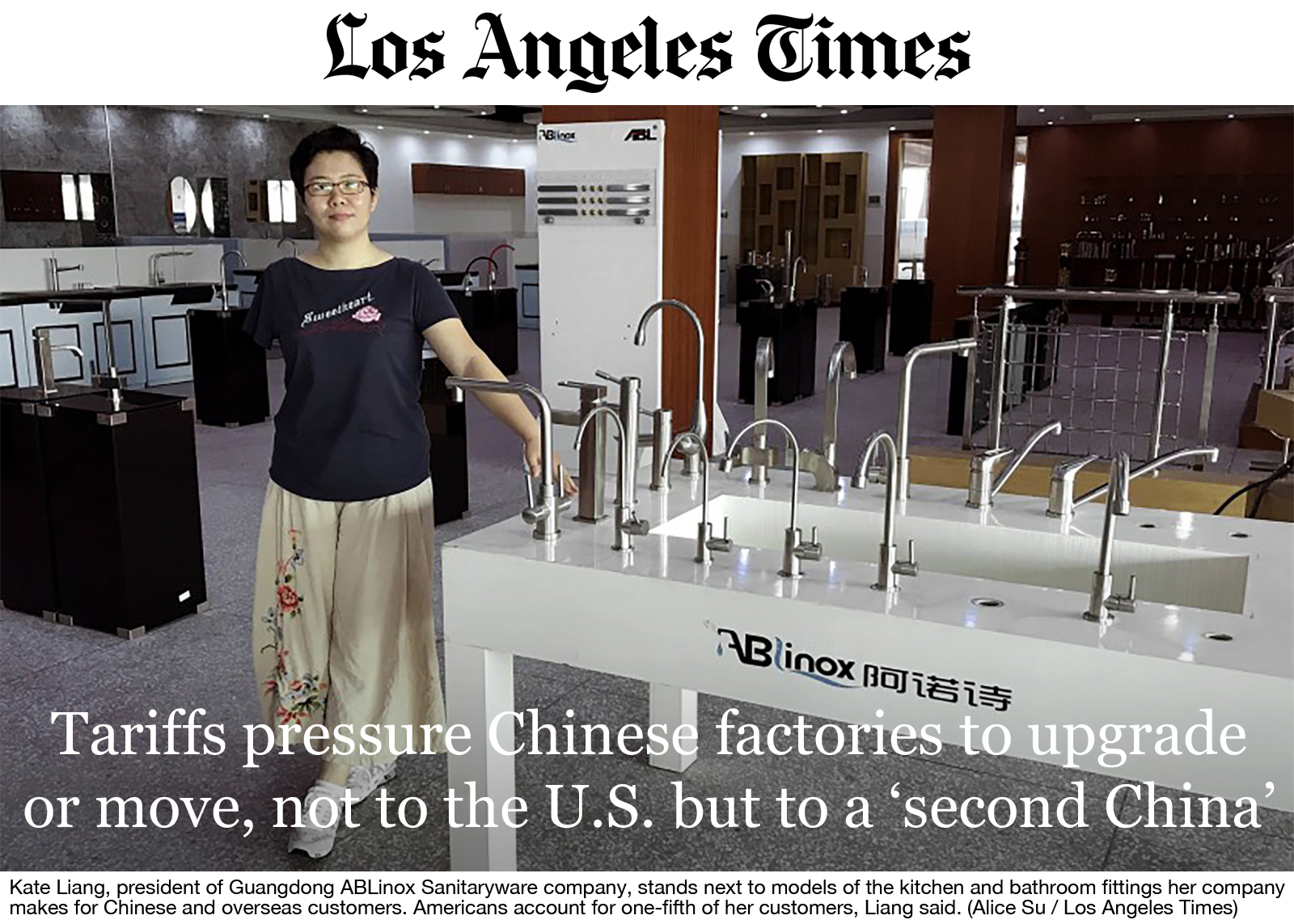 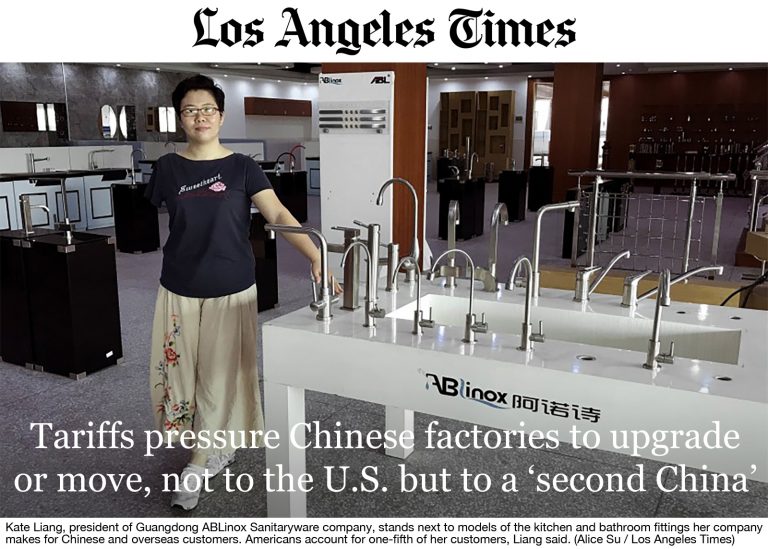 Reporting from Guangzhou, China — Christopher Devereux believes anything can be “made in China.”

In 2003, he came to Guangzhou to open ChinaSavvy, a British-owned firm that connects Western companies with Chinese factories to produce metal and plastic goods.

But within three months of Donald Trump’s election in 2016, ChinaSavvy had opened a new branch in Vietnam.

“At that time there were no tariffs, but we thought it was a prudent step to take,” said Devereux, the company’s managing director and vice chairman of the British Chamber of Commerce.

By the time the newest U.S. tariffs on Chinese goods were enacted last week, Devereux had changed the company’s name from ChinaSavvy to Omnidex, and now he’s fielding calls from panicked clients wanting to shift their supply chains to Vietnam.

The tit-for-tat trade war between Washington and Beijing is pushing some foreign manufacturers to move factories out of China — not to the United States, despite President Trump’s insistence that tariffs will bring back U.S. factory jobs, but to a “second China,” in Southeast Asia.

Even Chinese firms, which were already leaving over other issues, are speeding up their exits and changing the face of Guangdong province, once the manufacturing capital of the world.

The United States and China have been imposing or increasing customs taxes on each other’s goods for nearly a year while negotiating over business issues including intellectual property protection and foreign access to Chinese markets.

Although tariffs end up mostly being paid by domestic consumers, they are affecting the supply chain.

Devereux said his American clients have been calling every other day, asking how quickly they can shift supply chains to Vietnam.

“Customers don’t trust Trump, that he’s not suddenly going to come up with more tariffs,” Devereux said. “So they’re looking for us to move products we manufacture that aren’t even covered by the tariffs at the moment, to be ready to move that to Vietnam.”

It’s not just foreign companies shifting supply chains. Chinese companies are also moving to Vietnam, where they can avoid tariffs and pay one-third to half the minimum wage in Guangdong, he said.

None of his clients have chosen to move production lines to the United States, Devereux said.

“You force businesses back to the United States, and you have a wage level that’s five times, 10 times more,” he said. “How are you going to compete? Even if you keep on putting bigger and bigger tariffs, you’ve got to manufacture somewhere else.”

“Effectively, he will create another mini-China in Vietnam,” he said. “And then I suppose he’ll put tariffs on those” products.

Guangdong province was once the heart of China’s economic reform. It attracted waves of investors — first from Hong Kong and Taiwan, then from farther abroad — who turned small towns such as Dongguan into sprawling factory cities in the 1990s and 2000s.

As China became the “factory of the world,” migrant workers from poorer, inland provinces flooded to Guangdong, accepting dire working conditions and dirt-cheap wages that were still higher than anything they could get at home. Migrants would line up overnight for factory jobs.

Twenty years later, Guangdong has transformed. Rising affluence has raised wages and empowered workers to demand better labor protections. Millennials want freedom and meaning in their choice of work, not 18-hour days in a factory.

“The trade war gives China a chance to rise up,” said Kate Liang, president of Guangdong ABLinox Sanitaryware Co., which makes stainless steel kitchen and bathroom fittings in Zhaoqing, a quiet city about an hour’s drive from Guangzhou.

When the Trump administration began imposing tariffs, Liang said, she started reading philosophy books to help her strategize. A book about West Point leadership strategy lay on her desk.

“It’s survival of the fittest,” she said, invoking her favorite theorist, Charles Darwin. “If the environment is harsh, maybe a lot will die. But those who live on will be the best.”

In Guangdong’s factory boom, in the early 2000s, she said, business was good, but “there was low quality, zero process.”

As cheap mass production gets squeezed out of China, she hopes higher-quality companies will remain. “It affects those who are low-end, lower quality, wasteful — bad energy use, bad for the environment — those working purely for money,” she said.

Many of Liang’s competitors have moved to Vietnam since wages increased in China. But she decided to stay and upgrade her company.

“After 10 years, the salary for Vietnam will increase. Everything will increase, and then they need to go away again,” Liang said. “If you move, it’s good for the Vietnamese economy but not for the industry, because there are no breakthroughs. You’re just walking the same road again, wasting the same resources, time and earth.”

U.S. customers make up 20% of Liang’s market, and she wants to expand there. But if tariffs continue, she said, she’d focus on China and other markets.

“My market exists, whether you buy or not,” Liang said.

Those who rely on U.S.-China trade for a living are not so confident.

The U.S.-China trade war just got a lot worse. And there’s no quick fix for relations »

“We exporters are directly affected, especially people like me who only work on America,” Fung said. “We really hope this will be solved in the next few months. But we’re not sure how Trump is thinking, so everyone is anxious.”

As U.S.-China trade talks continue, Fung said he is also watching negotiations between shippers and buyers.

Theoretically, U.S. consumers pay the tariffs on Chinese goods. But buyers have negotiating power, and many Chinese factories split the cost of taxes with their American buyers.

“Trump’s taxes are not just added on to Americans,” Fung said. When tariff levels were at 10%, many Chinese factories split the taxes with their American buyers, he said. “Fifty percent of 10% taxes was a lot. But they just did it, because this was the only way.”

“But a lot of us here are living off of the U.S.-China relationship. We survive on this, especially here in the world’s manufacturing center.”

Many other Dongguan agents who once worked on U.S.-China shipping have now shifted to work on the China-Vietnam line, Fung said.

Fung, however, has invested decades into building relationships with agents in L.A., Chicago, Seattle and New York. He’s specialized in the American system and doesn’t want to change fields. But he’s thinking about it.

“I really hope it’ll get better, so that the U.S. and China both benefit. I’m sure American consumers hope that too,” Fung said.

“If they don’t work together anymore, we’ll be living off nothing but air.”

Any cookies that may not be particularly necessary for the website to function and is used specifically to collect user personal data via analytics, ads, other embedded contents are termed as non-necessary cookies. It is mandatory to procure user consent prior to running these cookies on your website.