Has The Trade War Taken A Bite Out Of China’s Economy? Yes — But It’s Complicated 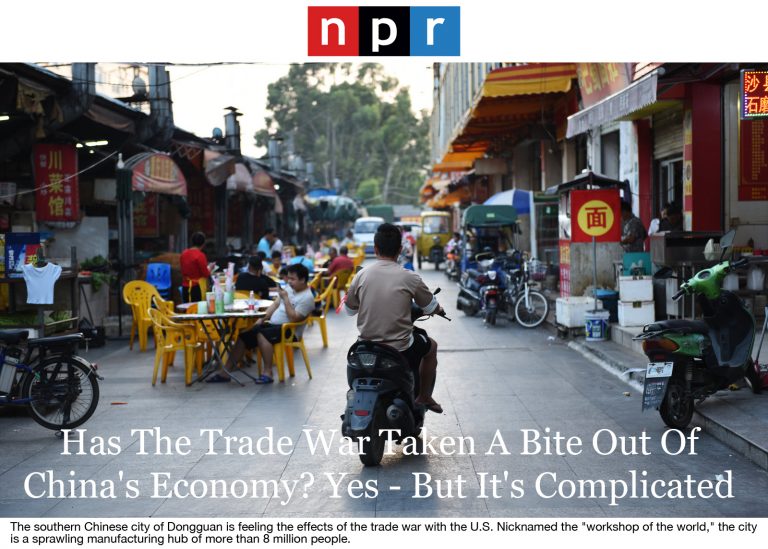 In the industrial city of Dongguan, China, the effects of the trade war on the Chinese economy are measured in idled machinery and empty bar stools.

“One year ago, you probably couldn’t even get through the crowd because it would be so busy. But right now, even the smallest vendors can’t survive,” says Song Guanghui, the owner of Crowdbar, a tricked-out food stall in an open-air market in Dongguan.

The market is across the street from an enormous factory complex that specializes in making shoes. Crowdbar’s flashy electric sign, cold beer and bombastic owner used to draw crowds of workers at shift change.

But shoes are among the thousands of products that the Trump administration has slapped double-digit tariffs on since the trade war began in early 2018. Trade talks between the U.S. and China resumed Thursday. But a deal is far from done.

Meanwhile, 70% of footwear sold in America is imported from China. And with tariffs cutting into their bottom lines, many manufacturers have already relocated operations to countries like Vietnam and Indonesia.

That has left Song and Crowdbar short of workers to buy his barbecue skewers and beer. “I’m probably going to pick up and move elsewhere. If I stay here for much longer, I’m not going to be able to make it,” says Song.

There are clues like this about the Chinese economy’s health nearly everywhere in Dongguan. It’s a sprawling manufacturing hub of more than 8 million people in southern China, nicknamed the “workshop of the world.” Cities like Dongguan are among the hardest hit in a trade war that targets goods manufactured on razor-sharp margins.

“I think there’s a pretty major impact if you just look at the numbers,” says Victor Shih, a political economist at the University of California, San Diego, who studies the Chinese economy. China exports more goods to the U.S. than to any other country in the world, and those exports have dropped by more than 12% this year alone, he says.

That drop has clearly hit the Chinese manufacturing sector. Industrial output growth in China fell to its lowest level in 17 years this summer.

On top of the trade war, China’s economic growth has been slowing down for years. It’s difficult to pinpoint exactly how many of China’s current economic troubles are due to the trade war or the existing slump. But tariffs have undoubtedly contributed to slower growth since the early months of 2018, when the economic standoff began, experts on the Chinese economy say.

President Trump’s trade war has hit the U.S. as well. Economist Arthur Kroeber, head of research at Gavekal Dragonomics, says that tariffs have made products imported from China more expensive. “The brunt of the burden of tariffs is being borne by U.S. consumers,” Kroeber says.

American farmers who’ve had retaliatory tariffs placed on the goods they export to China have also suffered, despite aid packages supplied by the U.S. government.

The Chinese government has many more tools at its disposal to alleviate some of the trade war’s pressures. The central government recently slashed taxes on businesses and corporations to help cushion the blow. The government also devalued its currency so that Chinese goods were cheaper, and thus would be more attractive, to trade partners around the world.

Another tool available to the central government, experts say, is massaging official data coming out of Beijing. The official unemployment rate in China, for instance, has hovered between 4.3% and 3.6% for nearly 20 years. A lack of fluctuation beyond a percentage point for such a period of time is highly unusual. And the government even shut down the release of regional manufacturing statistics out of Guangdong province, where Dongguan is located, that cast doubt on rosy national numbers.

But if some of the data is not to be trusted, anecdotal evidence on the ground in Dongguan paints a somewhat clearer picture.

On the dusty outskirts of the city, a dog of indeterminate heritage lazes in front of the entrance to the Dongguan Fangjie Printing and Packaging Company. The mood inside the plastic bag factory, however, is one of brisk efficiency. Workers in green polo shirts and blue caps monitor machines spitting out brightly colored plastic bags — bags for detergent, candy and dog poop.

“We make about 15 different kinds of doggie doo-dah bags,” says Christopher Devereux, the managing director of Omnidex, a company that connects foreign companies from all over the world with Chinese factories like Fangjie that can manufacture their products.

Until the trade war, Devereux’s business was called ChinaSavvy. But earlier this year, he changed the name because, increasingly, he’s working with factories outside China. In fact, he recently pulled most of his clients out of the Fangjie factory and moved their business to factories in Vietnam, “because of the tariffs, [because of] the trade war.”

And new business has evaporated, he says: “My inquiries from American customers about coming to China have dropped off considerably.”

But Devereux concedes that he had already been considering a move to Vietnam when the opening shots of the trade war were fired.

“Wages have been going up steadily over the years, which happens when you get a more educated populace,” says U.C. San Diego’s Shih.

A more educated population means fewer low-skilled workers for production lines in factories like Fangjie Printing and Packaging Company. Factories have to offer higher wages to attract the best workers. And those wages eat into the bottom lines of the companies that Devereux places in Chinese factories.

“If you look at Vietnam now, you’ve got wages being roughly one-third of what they are here in China,” says Devereux. And so the trade war merely sped up his move out of China and into Vietnam. “Two or three of our American customers, knowing we were looking in Vietnam, asked us to accelerate that” when the trade war began, he says.

“Even in the absence of a trade war, China’s growth rate would have come down. The trade war makes it worse, but the trade war is not the primary reason,” says Shang-Jin Wei, an expert on the Chinese economy at Columbia University and a former International Monetary Fund official.

The real challenges to the Chinese economy, Wei says, are structural issues like a lack of low-skilled workers to populate factories, an over-reliance on the manufacturing sector and an aging workforce.

Still, at the plastic bag factory in Dongguan, a cluster of brand-new machines sits idle. “These four machines they bought especially especially for us,” says Devereux, sweeping an arm toward the shiny machines on the factory floor. “And now we’re saying bye-bye.”

This website uses cookies to improve your experience while you navigate through the website. Out of these cookies, the cookies that are categorized as necessary are stored on your browser as they are essential for the working of basic functionalities of the website. We also use third-party cookies that help us analyze and understand how you use this website. These cookies will be stored in your browser only with your consent. You also have the option to opt-out of these cookies. But opting out of some of these cookies may have an effect on your browsing experience.
Necessary Sempre ativado
Necessary cookies are absolutely essential for the website to function properly. This category only includes cookies that ensures basic functionalities and security features of the website. These cookies do not store any personal information.
Non-necessary
Any cookies that may not be particularly necessary for the website to function and is used specifically to collect user personal data via analytics, ads, other embedded contents are termed as non-necessary cookies. It is mandatory to procure user consent prior to running these cookies on your website.
SALVAR E ACEITAR