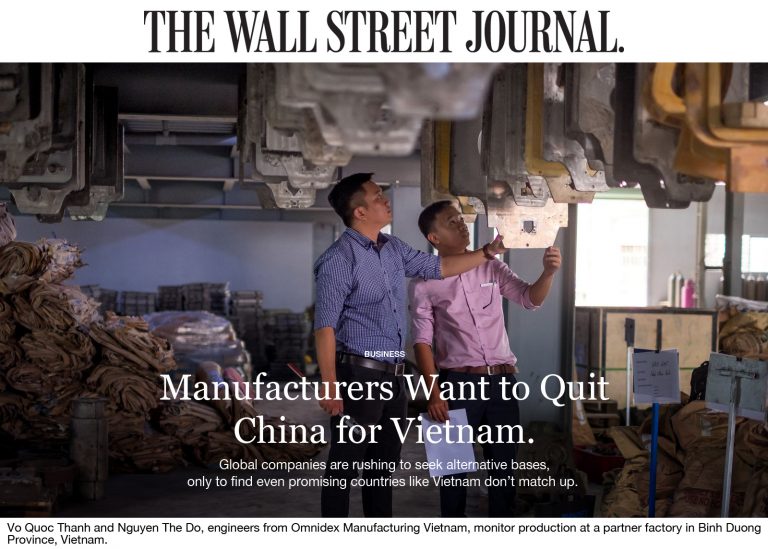 HO CHI MINH CITY, Vietnam—With the U.S. and China tangled in a nasty trade fight, this should be Vietnam’s time to shine. Instead, it is becoming increasingly clear that it will be years, if ever, before this Southeast Asian nation and other aspiring manufacturing destinations are ready to replace China as the world’s factory floor.

The specialized supply chains that made China a production powerhouse for smartphones and aluminum ladders and vacuum cleaners and dining tables are nowhere near as developed in Vietnam. Factories with U.S.-focused safety certifications and capital-intensive machinery aren’t as easy to find.

And Vietnam, with less than one-tenth China’s population, is already running into labor shortages as global manufacturers rush to set up shop here to avoid U.S. tariffs.

Omnidex has shifted some production to Vietnam, but out of more than 80 parts of a pump used in mining operations, factories here have been able to begin work on only 20 so far because molds must be created from scratch.

“You can’t just shift your business to Vietnam and expect to find what you’re looking for,” she said.

Business leaders say they are preparing for a protracted fight between the world’s two largest economies. Few companies are planning to leave China altogether, but those that heavily clustered production in the country are urgently looking to diversify.

Some companies are relocating parts of their production lines to Southeast Asian countries or elsewhere, while continuing to manufacture in China for the Chinese and non-U.S. markets, a strategy they call “China+1.” Others with huge orders are hoping to nudge their Chinese suppliers to move operations out of China.

As a result, a new global manufacturing landscape is starting to take shape, executives say. Production leaving China is getting divvied up among developing countries, with a small portion going to the U.S. on the back of automation. The reordering of supply chains is likely to leave China with a diminished but still significant share of the pie.

The creation of new industrial clusters won’t happen overnight. Vietnam offers cheap labor, but its 100-million population is small compared with China’s 1.3 billion, and its roads and ports are already clogged. India has the manpower, but skill levels fall short and government rules are relatively restrictive.

“The question everyone is asking is: ‘Where should we go?’ ” said Giang Le, a Singapore-based analyst for strategic consulting firm Control Risks. “The answer is not obvious.”

California-based camera-maker GoPro Inc. is moving most of its U.S.-bound production to Guadalajara in Mexico while keeping its China operations for other markets. Universal Electronics Inc., which is based in Arizona and makes smart-home technology, has a new partner in the Philippines and is also expanding operations in Monterrey, Mexico.

Hong Kong-listed Techtronic Industries Co. Ltd., which makes Hoover vacuum cleaners, will set up a new plant in Vietnam and add capacity to its Mississippi operations. It will maintain some production in China for at least a decade, the company said.

The Chinese model of the past 20 years thrived on suppliers being close to each other, making production quicker, less expensive and more efficient. Now, as operations become more fragmented, they are threatening to raise costs, stretch delivery times and expose companies to multiple tax and labor regimes.

Companies are starting to focus on the intricate rules that govern how much of a product needs to be manufactured in a country, say Vietnam, to be considered “Made in Vietnam,” said Willy C. Shih, an economist specializing in manufacturing at Harvard Business School. “The era of the benign trading environment is over,” he said.

The shake-up is just the opportunity Vietnam has been waiting for. Labor-intensive manufacturing of sneakers and sweaters moved here years ago in response to rising Chinese wages. South Korean giant Samsung Electronics Co.has invested billions. Hanoi is eager to further expand electronics and engineering industries that are high up the value chain.

Vietnamese firm Hanel PT, which makes electronics for fire alarms and motion sensors, says it is negotiating its biggest deal yet, equal in value to half its current contracts. The 20-year-old manufacturer counts big Japanese companies as clients, said director Tran Thu Trang, but U.S. firms have made contact for the first time.

Founder Frank Vossen said companies accustomed to operating in China are struggling to adapt. “There is no ready-made solution in Vietnam, that’s the reality check,” he said.

Workers are already getting tough to find. A local exporter of pipes and hoses is swamped with orders for tariff-hit products, but it has only been able to hire 30 of the 100 workers it needs. A Japanese furniture maker for brand Muji said it has had production delays since January because of labor shortages.

Yotaro Kanamori, the planning manager for the Tokyo-based firm Generation Pass Co. Ltd., said the firm is now renting a factory for itself instead of relying on contract work. He struggles to explain to his Vietnamese suppliers why a table’s underside needs to be as well-made as the top.

The manufacturing shift toward Vietnam has been a long time in the making. Early movers such as Nike Inc. began buying shoes from Vietnamese factories in the mid-1990s. As minimum wages in China grew, more orders for clothes, toys and shoes shifted to less expensive destinations in Bangladesh, Myanmar and Vietnam.

Japanese multinational Canon Inc. began making printers in northern Vietnam in 2012. But supply chains for products like printers and cameras are vast and difficult to re-create. Of Canon’s network of 175 suppliers in Vietnam, only 20 are local companies, said senior manager Dao Thi Thu Huyen. They mostly make plastic parts and packaging.

Nearly all the electronics components come from Japan, China and Taiwan, she said.

The pace of companies moving production lines to Vietnam began speeding up last year as executives who had been weighing the country’s potential decided to take the plunge.

Christopher Devereux had started a company called ChinaSavvy in the early 2000s that took orders from Western firms for complex metal products and worked with factories in China to get them made at what he used to tout as “China prices.” By late 2018, after the U.S. imposed tariffs, his clients began asking: How quickly can you move out of China?

Mr. Devereux inspected dozens of factories in Vietnam, sometimes six a day, and rebranded his company “Omnidex” to project a global profile.

Relocating the manufacturing of pumps for Pennsylvania’s McLanahan Corp. is taking some doing. The pumps are made up of seven dozen pieces that must be cast precisely to avoid leaks. Mr. Devereux first tested the waters by making the small parts in factories near Ho Chi Minh City. Even that wasn’t easy, said Truong Khac Long, the Vietnam manager.

The bright red DuPont powder coating was tough to get. There weren’t as many qualified foundries to choose from, and those producing for the domestic market didn’t always have quality-control specialists. Engineers from China had to travel back and forth to Vietnam, where suppliers made samples again and again to get it exactly right.

Executives decided the manufacturing of bigger parts couldn’t be moved. The pump would be produced in two countries, unable to fully escape tariffs.

By spring 2019, Peter Zhao, who was in charge of getting products made for Wisconsin-based electrical tools company ECM Industries, had given up hope the trade war would end. He turned to Google to search for agents in Southeast Asia and contacted Vietnam-based intermediary Seditex.

Mr. Zhao directed them to find a factory with experience making multimeters, which measure voltage and are currently made in China. Seditex agents scoured their networks but couldn’t come up with one. The closest fit was a firm called Viettronics that made TVs and other devices.

In their office, a Viettronics R&D expert dismantled the sample multimeter Mr. Zhao had sent. His conclusion: The company could find local suppliers for the instrument’s plastic casing and cables and assemble the multimeter in its factory, but some of the major parts, like the integrated circuit, would need to be imported.

That was a problem for Mr. Zhao. He was used to buying nearly everything in China since production of the multimeter moved there a decade ago from Taiwan. Over time, Chinese factories created their own tweaked model that drew on the strengths of their well-developed supply networks.

Mr. Zhao didn’t get involved with solving design questions or finding components, concerning himself only with the finished product and final price. He interacted largely with the main supplier, not the tiers of vendors underneath, and maintained a lean operation.

To move production to Vietnam, he said he would have to develop a cross-border supply chain from scratch, identify factories in China for parts the Vietnamese can’t make and negotiate quality standards, compatibility and prices. He didn’t have the manpower or budget for that, he said.

Still, he is thinking about brokering a partnership so that major Chinese parts can be encased in Vietnam-made plastic covers and assembled in a Vietnamese factory. He worries though that if something goes wrong, his Chinese and Vietnamese vendors will each blame the other.

This website uses cookies to improve your experience while you navigate through the website. Out of these cookies, the cookies that are categorized as necessary are stored on your browser as they are essential for the working of basic functionalities of the website. We also use third-party cookies that help us analyze and understand how you use this website. These cookies will be stored in your browser only with your consent. You also have the option to opt-out of these cookies. But opting out of some of these cookies may have an effect on your browsing experience.
Necessary Siempre activado
Necessary cookies are absolutely essential for the website to function properly. This category only includes cookies that ensures basic functionalities and security features of the website. These cookies do not store any personal information.
Non-necessary
Any cookies that may not be particularly necessary for the website to function and is used specifically to collect user personal data via analytics, ads, other embedded contents are termed as non-necessary cookies. It is mandatory to procure user consent prior to running these cookies on your website.
GUARDAR Y ACEPTAR